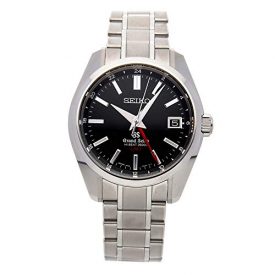 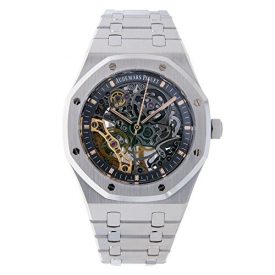 In fact, Audemars Piguet has been able to create not one, but two of the most recognizable timepieces of the modern era – the Royal Oak and the Millenary. The Royal Oak’s design is widely lauded as a stroke of genius today, but at its launch many found it either disturbing or implausible or both. The Millenary, on the other hand, is just as instantly recognizable, but has had to follow an even longer road to acceptance and appreciation. We feel it definitely has the potential to rise to the status of a design icon for AP; after all, it’s as visually distinctive as the Royal Oak. It is true, though, that the two watches may appeal to very different sensibilities and tastes.
The Royal Oak is widely regarded as the most disruptive and virile of the two, while the sensual curves of the Millenary are reminiscent of much more traditional wristwatch case shapes. But for that very reason, the latter has sometimes been regarded (by men who prefer the Royal Oak and its Offshore derivatives) as something of an alternative offering to the Royal Oak, rather than a strong design statement in its own right. And certainly, off the wrist it’s easy to see why it might give that impression. 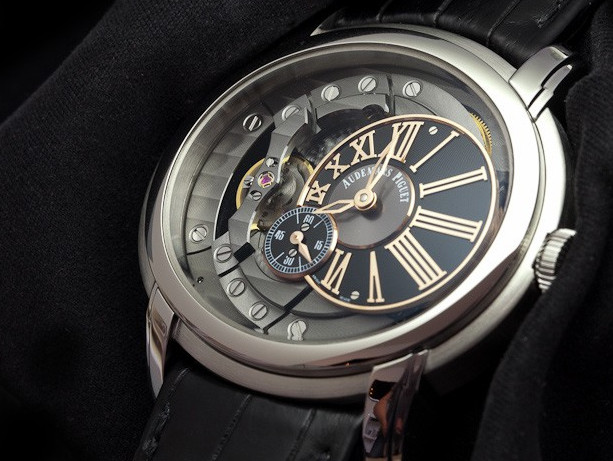 The oval shape of the Millenary is – in comparison to the Royal Oak at least – at first glance, indisputably less overtly assertive. On the wrist, however, at 47 mm, this is clearly a watch whose actual physical presence strongly refutes the notion that it was designed as, and intended to be, a more sedate alternative to the Royal Oak. The challenge, for AP, has been actually getting on the wrists of those who doubt its its ability to have an equal, if definitely different, impact.
And Audemars Piguet certainly haven’t treated it as a second-class citizen. Around since the mid-1990s, the Millenary has housed multiple high-end complications and introduced new ones, but still it has been overshadowed by the sheer popularity of its brethren. On the wrist however, there’s no doubting that the Millenary, like the Royal Oak, has a powerful and dynamic architecture and presence all its own. The challenge, for AP, has been getting it on those who hesitate at its somewhat unusual case shape.

Enter the Openworked Millenary: a highly skeletonized, timepiece that rather than attempting to compete with anything else in the AP stable, stakes a claim to its own strong design language. Audemars Piguet have a history of stripping timepieces down to the bone through the art of openworking, starting in 1921 with one of their pocket watches, and since then they’ve become famous for the excellence of their openworking in many, many different wristwatches as well, up to and including members of the Royal Oak family (see for instance the Extra-Thin and Tourbillon Extra-Thin openworked models).
But none of them have been quite so dramatically exposed as the new Millenary Openworked. Based on the Millenary 4101, it is in in essence the same watch but minus every microgram of non-essential metal. Everything has been reduced to the barest minimum, including the bridge and rotor. The result is an elliptical watch defined by its edges, both inside and out. 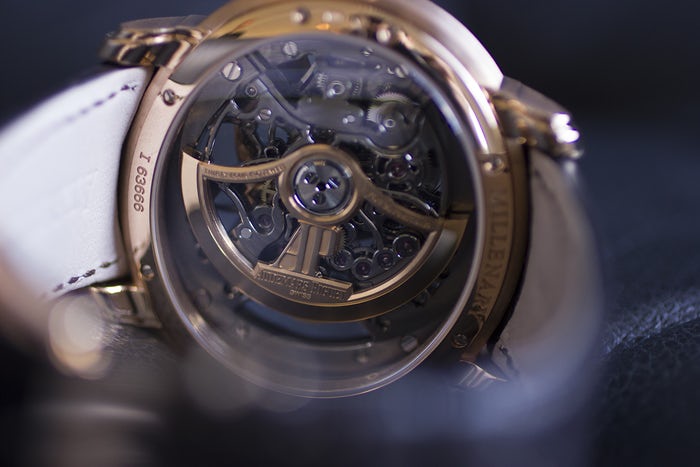 The three-dimensional architecture of the non-openworked model already revealed a great deal, since the balance could be seen on the dial side of the watch – the movement in the 4101 took elements from Audemars Piguet’s in-house movement, caliber 3120 (such as the distinctive balance bridge) and reconfigured them in order to place the regulating elements next to the dial and make them more visible. That dynamic layout is back, with off-centered hours and minutes, and a small seconds register between 6 and 9 o’clock, although now openworked – which provides an even better view of the movement.

The Audemars Piguet Millenary 4101 ref. 15350ST.OO.D002CR.01 is fitted with a 47 mm oval-shaped case in stainless steel, that in reality wears more like a 44 mm. The case features a stepped construction on both the lugs and the case, perfectly framing the off-centered dial with a thickness of 13 mm. The Audemars Piguet Millenary 4101 ref. 15350ST.OO.D002CR.01 is fitted withglareproofed sapphire crystals on both the front and the case back to minimize glare and allow for uncompromised views of its intricate beauty. The Millenary 4101 is water resistant to a depth of 20 meters and is fitted with a gorgeous screw-down crown.

Making up the dial, the AP in-house calibre 4101 was reversed to enable the dial side to display components that are usually hidden on the back like its beating heart —balance wheel and escapement. The black and anthracite dial, features a three-dimensional construction with several layers and two off-centered black snailed discs.
While the bigger disc features pink gold applied Roman numerals, the smaller one superimposed at 7 o’clock, features an Arabic numeral seconds track in white. The hands, also made of pink gold, feature luminescent material inserts. The bevels on the bridges on the dial side are diamond graved. 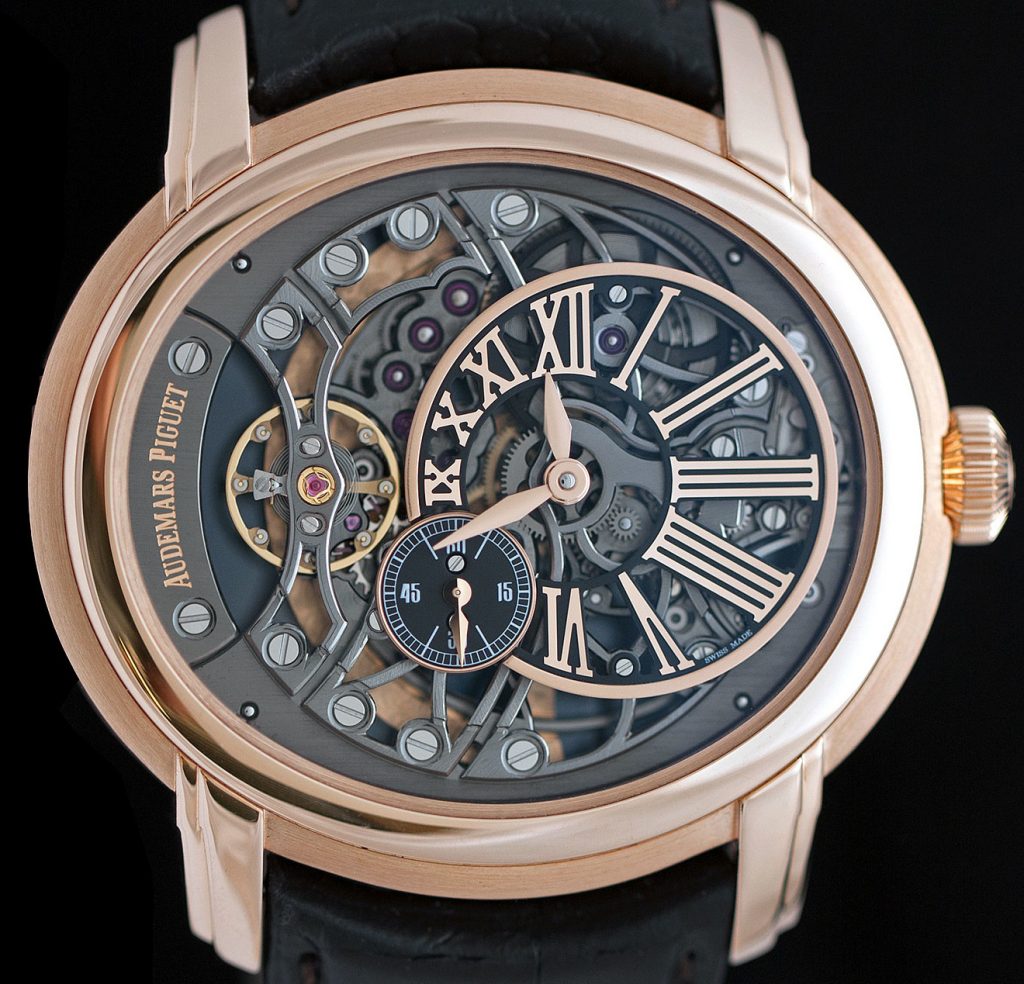 The beating heart inside the Audemars Piguet Millenary 4101 ref. 15350ST is the in-house automatic calibre 4101. This movement, fully designed and manufactured at the manufacture in Le Brassus, is composed of 284 parts and 34 jewels. The movement beats at a frequency of 28,800 vph —4 Hz— to provide a power reserve of 60 hours. The movement is fitted with a 22K solid gold oscillating weight and fully visible via the dial side and the display case back. Perhaps, the only thing that we dislike about the Millenary 4101, is that because the movement was reversed so that its back side would face the dial side, when looking at the back of the watch, it almost seems like something is missing and there’s too much empty space around the oscillating weight —not a deal breaker. 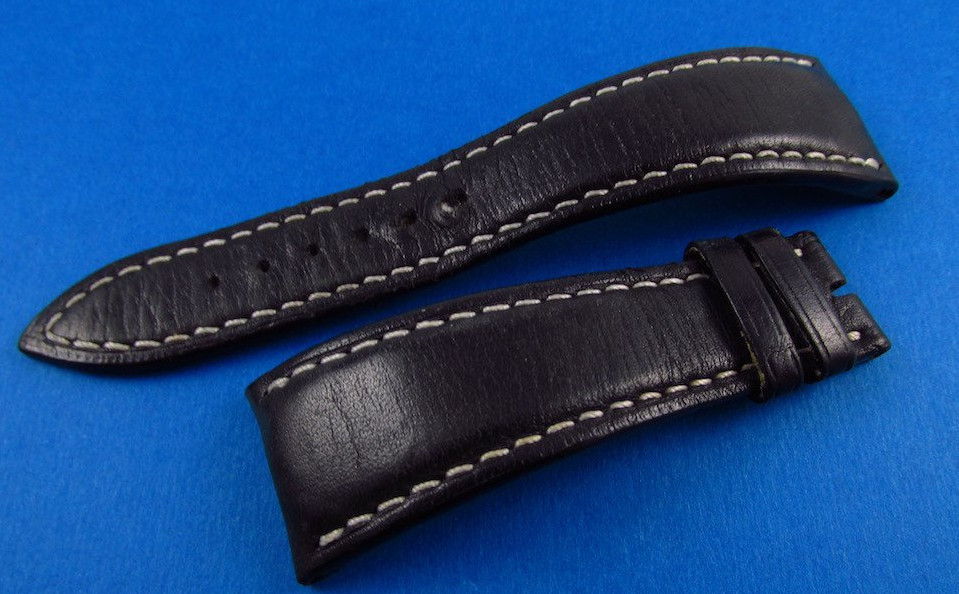 The AP Millenary is equipped with a black hand-stitched large square scale alligator strap with stainless steel AP folding clasp. The strap is very supple and a perfect match to the elegant look of this fascinating timepiece.

Price of this Millenary 4101 is $18,994 , excluding VAT. The watch comes with a beautiful alligator strap and a stainless steel AP signed folding clasp.

This is a free shipping option for Prime members purchasing Prime eligible items that are in stock. Your Prime orders will be consolidated into the fewest number of packages possible and may take longer to ship depending on product availability.

I want my items faster. Ship each item as soon as it becomes available

This is also a free shipping option for Prime members purchasing Prime eligible items that are in stock. Your Prime items ship as they become available. You should choose this option if you want to receive each item as fast as possible.

For items that are in stock, your orders will be consolidated into the fewest number of shipments possible. This may take longer to ship depending on product availability, but there will only be one shipping charge for the entire order.

I want my items faster. Ship each item as soon as it becomes available (at additional cost)

For items that are in stock, your items ship as they become available. You should choose this option if you want to receive some items quickly. The number of shipments we make for your order is dependent upon: If your order has dissimilar items such as, a book, a computer, and a cordless drill, they may ship separately, depending on where in our fulfillment network they happen to be located. These items are marked on their product detail pages and will ship separately from other items in your order.
Note: You will not be charged more for shipping than the amount that was originally quoted to you at the time you place the order. Shippers are selected depending on the weight of the package and the distance it has to travel from our fulfillment center, requests for specific shippers will not be accommodated. 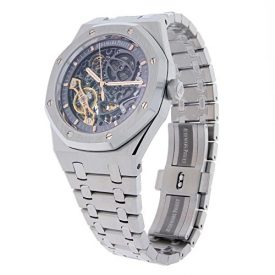 Warning: file_get_contents(): https:// wrapper is disabled in the server configuration by allow_url_fopen=0 in /home/wahichatihost/public_html/evawatches.com/wp-content/plugins/woodmart-core/post-types.php on line 629